Air Force One would have flown very close to a drone when it was in full final approach maneuver, according to journalists on board.

The drones are one of the problems they face increasingly frequent crews in flight. These electronic devices, which caused the closure of Barajas Airport a few months ago, can be responsible for fatal accidents if flown in restricted areas, fines and imprisonment for the pilot of the drone apart.

The last of the drone problems has run into what is perhaps the most famous aircraft in the world. Not even Air Force One is exempt from the difficulties caused by these small flying machines. It should be emphasized that the callsign Air Force One is received by any plane in which the president of the United States is.

Last Friday Donald Trump was not flying aboard the Boeing 747-200 to which we are accustomed, but rather in the presidential Boeing 757, a notably smaller and more flexible aircraft for short and medium-haul flights. And it was on this trip that he came across a drone that could cause him a lot of trouble .

This incident occurred a few days after Trump left a press conference at the White House after hearing shots in the vicinity. The secret service, in charge of the president’s security, acted immediately and all the alarms around him were activated.

Drone vs. Air Force One

How simple it is today to get hold of a drone and fly it in the vicinity of an airport ‘scares’. The low price and advanced features of the latest models make them especially attractive to users who, on many occasions, do not bother to read the regulations of their country.

The Air Force One case was reported by several journalists who were on board the aircraft. In the United States, it is common for those in charge of covering the president’s news to travel on the same plane and follow him on all official trips.

The Boeing 757-200 modified to house the president, corresponding to the military model C-32A, was covering the route between Trump National Golf Club in New Jersey and Andrews Air Force Base when it “flew very close to a small object,” according to published Sebastian Smith, an AFP journalist, on Twitter.

Apparently, when the plane was on the final approach – one of the most delicate phases of flight – several occupants noticed the proximity of what was presumably a drone. At the moment, many more details are not known and we will have to wait for the data to be clarified by the Federal Aviation Administration and the United States Air Force.

Andrews Airfield is the home base for the President of the United States on travel to and from Washington DC. Several planes at Trump’s disposal are parked and fully operational there ; also becoming one of the most guarded airports in the North American country. Until the end of the Cold War, it was the enclave of the doomsday plane, possibly the safest aircraft in the world in the event of a nuclear attack.

Although the Boeing 757-200 is a relatively large aircraft with large engines, a small drone can do a lot of damage . It can be ‘ingested’ by any of the engines and cause it to stop in the middle of the landing process, it can also collide with any part of the plane and even cause an emergency maneuver by the pilot in command to avoid a collision. In all the above cases, it endangers the occupants of the plane and the people who are in the vicinity of the aerodrome.

If the drone is big enough and the aircraft it collides with small, it can pose even more problems. There are currently very heavy drones that, if they collide with light aircraft or ultralights, can cause significant damage to the structure of the ship. Not to mention the possibility of launching missiles that war drones have, although one of those is more easily detectable by airport radars and other anti-drone technologies.

In the United States, as in the vast majority of countries, flying over or near airports is not allowed . The FAA, the state-level in charge of aviation, provides web pages with where you can fly. In addition, they have applications to request specific flight permits.

Where can I fly a drone?

The simplest question is where you cannot fly a drone. In Spain the law is really clear in this regard and makes the distinction between professional drones and ‘leisure’ drones. For the former it is required to pass a few official exams and we will have the license, but the most common question is about recreational drones.

Common sense should be the main guide, although in Spain, given the distribution of military bases and delicate infrastructures, it is best to consult online maps. One of the best sources is the interactive Enaire map, where you can see at a glance which areas are suitable for flight and which have some kind of restriction. 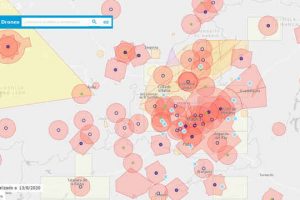 Also the State Agency for Aviation Safety (AESA) published a video on YouTube some time ago summarizing, in a very graphic way, the regulations for flying a drone. In our country, for example, you should not fly near airports, ecological protection zones, military installations, strategic installations … That is why it is best to take a look at the Enaire map and make sure that our area is free of any restrictions , including temporary ones.

In addition, to fly over an inhabited area or over a concentration of people, the drone must not exceed 250 grams in weight, not fly more than 20 meters high, maintain a safe distance from buildings and always with the drone in sight. Another important point to take into account is the installation of a fireproof plate where the full name of the pilot, contact telephone number and serial number of the drone appear, as collected in the Legal Journal .

@realDonaldTrump just landed at Andrews on AF1. Shortly before, while descending,we flew right over a small object, remarkably close to the president’s plane. Resembled a drone though I’m no expert. pic.twitter.com/roDFgpp4XH