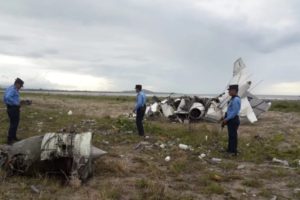 Aircraft Rockwell Sabreliner 60 crashed near an illegal landing strip located close to the beach between Bajamar and Punta Sal, Honduras. The local authorities arrived at the scene of the accident and found the wreckage of the aircraft, which was loaded with packages of cocaine and firearms. According to preliminary information, the airplane crashed after a bad landing on the illegal strip. There was no crew on board of the airplane at the arrival of the police officers.

The flight data shows that aircraft departed from an airfield near Chetumal, Mexico and headed over the Caribbean Sea on a heading towards Venezuela or Colombia.

The local authorities initiated an investigation for the accident and drug trafficking. Honduran authorities claim that stop of drug trafficking in national priority and the decrease in seizures is due to the operation of air, sea and land shields, despite the fact that smuggling in the remaining countries of Central America is high. Other versions assure that the criminal organizations have changed the route for the transfer of drugs from the south to the north of the continent.