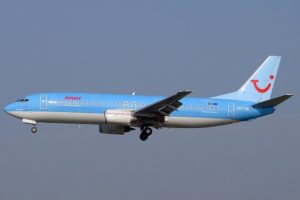 Drunk British tourist made a brawl aboard flight of German budget airline TUI fly from Manchester to Cancun (Mexico). The drunken Briton behaved aggressively and attacked another passenger. She also attacked the flight attendant and was very aggressive against other people on board. Common efforts of passengers, among whom were a former rugby player and a former policeman, as well as crew managed to keep her.

The plane made an emergency landing in Quebec (Canada), where the rowdy was handed over to the local police.

At the court, British tourist Bridget Hanley pleaded guilty to violating public tranquility, hooliganism and committing acts that endanger the safety of flights. Currently, she is serving her sentence in the form of a 20-day prison sentence in one of the prisons in the province of Quebec.

A spokesman of the predominantly Quebec province’s police department, formally named Ms Hanley and confirmed the outcome of the court hearing. They said that the airline also intends to file a civil lawsuit against her.

As representatives of the airline reported, as a result of the incident no one on board of the airplane was injured.