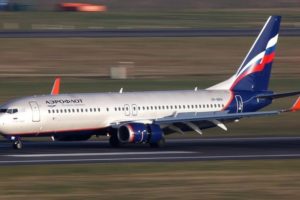 Aeroflot aircraft Boeing 737-800, performing flight 1515 from the western Siberian city of Surgut to Moscow’s Sheremetyevo Airport, made an emergency landing at Khanty-Mansiysk International Airport after a passenger attempted to hijack the aircraft. The passenger, who seems to have psychological problems, ordered the pilot to head the aircraft to Afghanistan. The hijacker claimed to be armed, but the pilot declared an emergency and landed safely at Khanty-Mansiysk.

After landing, security forces attacked the plane and detained the man. He was in a state of intoxication and not armed.

The investigation for the root cause of the accident is underway. There were no reported injuries among the passengers.

Aeroflot has dispatched a reserve aircraft to Khanty-Mansiysk so that the passengers can continue their journey to Moscow.

“In response to the growing threat of international terrorism in recent years all Aeroflot employees undergo thorough training on responding to such incidents in order to ensure the safety of passengers”, says the official statement of Aeroflot.

Aeroflot is the flag carrier and largest airline of the Russian Federation. The carrier is an open joint stock company that operates domestic and international passenger and services, mainly from its hub at Sheremetyevo International Airport.