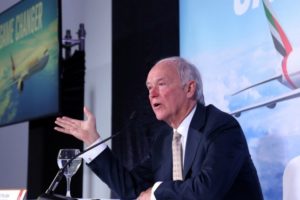 Airline companies also participate, but this year, one of the largest long-haul carriers in the region, Qatar Airways, is missing, as a result of the diplomatic dispute between Qatar and four Arab countries. The dispute is already in its fifth month without a solution. Saudi Arabia, the United Arab Emirates (UAE), Egypt and Bahrain cut off their ties with Qatar in June because of its relations with Iran and support for Islamist groups. The small Gulf state was accused of assisting the extremists. The Arab Quartet stopped direct flights to and from Qatar and closed its air space for Qatar aircraft.

At the start of the air show, the largest airline in the Middle East, Dubai’s Emirates, presented new and modern first class private apartments.

The first in the passenger segment, located in the middle of the plane without windows, will be equipped with “virtual windows” that reproduce the sky outside through fiber optic cameras. There is also a video call feature that connects passengers with cabin crew as well as temperature control and various lighting settings.

Emirates President Tim Clark refused to say how much the ticket would cost in the private apartments of 3.7 sq m that will be available in the airline’s Boeing 777.

In the previous years of the Dubai Exhibition, major Middle Eastern carriers have focused on their financial strength, including new orders for 140 billion USD in 2013, before a collapse in oil prices.

The exhibition runs until November 16th.