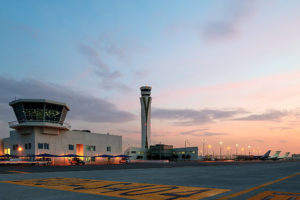 Dubai Airports, which runs the Dubai International Airport, plans to install biometric smart tunnels. Thanks to the new technology, the checking documents from travelers will take about 15 seconds.

According to the developers of the project, the passengers will not have to get out their bags and show their passports. It is enough to linger in front of the tunnel entrance for a few seconds to scan the retina of the eye, and then go through the tunnels at any comfortable pace – the sensors at that time recognize the face. The successful completion of the check will notify the customs and police controls. If the identity is confirmed, its color will change from red to green.

The exact date of appearance of “smart tunnels” on the terminal territory has not been named.

Meanwhile, they plan to launch another service at the airport – delivery of passengers to the airport by Tesla cars, in which it will be possible to weigh luggage and get a boarding pass. Upon arrival, the suitcases will automatically go to the loading – they will not have to carry them to the departure lounge.

Recall that in the summer at the Dubai International Airport, travelers have the opportunity to show a smartphone instead of a passport.