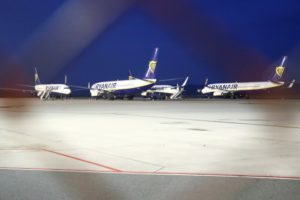 Dutch court has banned low-cost airline Ryanair from shutting down its branch in Eindhoven and relocating local pilots to other countries.

The judges at Hertogenbosch court concluded that Ryanair had not sufficiently substantiated its decision. It seems to be a “sanction for previous strikes”, in which the Dutch pilots were involved recently.

Ryanair announced last week that it would close its branch in Eindhoven on November 5 and will move 16 pilots. The fact that their employment contracts were concluded under Irish law does not mean, according to the court, that the employer may refuse to protect employees under Dutch legislation. That is why pilots should not move abroad against their will.

The decision is another blow to the airline after several days ago, the Italian competition regulator urged Ryanair and the other low-cost carrier Wizz Air not to charge their customers for hand luggage. The regulator says it has ordered the temporary suspension of the new baggage policy of the two companies. Ryanair and Wizz Air have 5 days to inform the committee of the measures they will take. Ryanair is now obliging its customers to pay for suitcases weighing up to 10 kilograms, which so far has been free of charge. From November 1st, each Wizz Air customer has the right to carry a free hand baggage (40x30x20 cm) and passengers who purchase WIZZ Priority will be able to board and luggage with wheels (55x40x23 cm).

For months, the largest European low-cost airline has been shaken by protests. Ryanair declined to recognize the trade unions as negotiating partners until December last year. Since August, there have been two coordinated workshops with trade unions in Portugal, Germany, Spain, Belgium and the Netherlands.