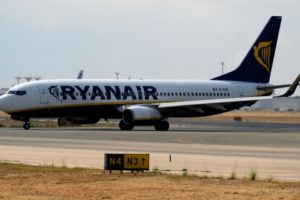 British low-cost airline Ryanair announced that its profit in the second fiscal quarter was affected by rising wage costs, high oil prices, and lower ticket prices. Thus, the earnings of Ryanair declined by almost 20% in Q2 2018 to 319 million EUR.

Ryanair also added that average summer ticket prices will be lower than expected. This is due to the serious competition, the heat wave in northern Europe and the insecurity caused by staff strikes.

Company employees continue to insist on better pay and better working conditions. Staff costs have risen by 34% due to a 20% increase in pilot wages.

However, the airline is expected to meet its forecast for annual earnings in the range 1.25-1.35 billion EUR.

The airline said it was concerned about the dangers of Hard Brexit, believing that this risk was underestimated. Ryanair warned the UK shareholders that they could lose their right to vote in the case of Hard Brexit.

“While there is a prospect of a 21-month transition agreement from March 2019 to December 2020, the recent developments in the British political sphere have added further uncertainty and we believe that the risk of Hard Brexit remains underestimated”, warned Ryanair. “We may be forced to restrict the voting rights of all shareholders outside the European Union (EU) in the event of a Hard Brexit to ensure that Ryanair remains a majority shareholder of EU shareholders”, adds the airline.