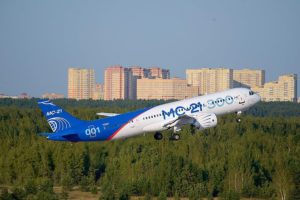 “The completion of the first cycle of certification flights by EASA is an important stage in the development of the MC-21 program”, said the Minister of Industry and Trade of the Russian Federation, Denis Manturov. He noted that the participation of EASA representatives in flight tests is a continuation of a large joint work carried out by specialists from the Russian aviation industry, the European Aviation Safety Agency, and industrial enterprises. “Obtaining a European certificate will open the way for the international market to the Irkut MC-21-300 aircraft”, added Denis Manturov.

According to the minister, during certification tests, the behavior of Irkut MC-21-300 aircraft was evaluated in various modes, including at high angles of attack and during stalling. Flights duration from 2.5 to 4 hours were performed at altitudes from 3 to 10 km.

The aircraft was piloted by an EASA test pilot. The crew also included Russian and foreign test engineers analyzing the current flight parameters. In September 2018, EASA testers took a special course in theoretical and practical training, as a result of which they were allowed to fly on Irkut MC-21-300 aircraft.

Irkut Corporation (as part of PJSC UAC) is conducting tests of the MC-21-300 aircraft in order to obtain Russian and European type certificates. Representatives of Russian aviation authorities and industry, as well as EASA experts, participate in the work.

Newer PostMore than 4,800 flights were canceled on Tuesday after heavy snowfall in the US
Older PostRussian airline Utair continues working to repay its debts