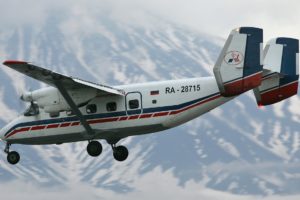 East Wing airplane Antonov An-28 crashed near Almaty in Kazakhstan, causing death of the five people on board. The aircraft was making sanitary flight on the route Almaty-Shymkent, but shortly after takeoff disappeared from the radars. It was understood that aircraft crashed on the ground and was shortly engulfed by flames. The local authorities succeeded to detect the area of the accident and sent rescuers and firefighters, which extinguished the flames and recovered the bodies of the five people on board. Unfortunately all of them were already dead.

“Aircraft An-28 of East Wing, which was making sanitary flight, disappeared from the radars at 18:47 local time on 28 km from Almaty”, said the official statement of Civil Aviation Committee of the Ministry of Investments and Development of Kazakhstan.

Later the airplane was found and the rescuers tried to recover the people, but they were already dead.

The local authorities started investigation for the accident, while the transport prosecutor’s office opened criminal case under the article “violation of safety rules for the movement or operation of air transport”.

Antonov An-28 is a twin-engined light turboprop transport aircraft, developed on the base of Antonov An-14M. The An-28 is similar to the An-14 in many aspects, including its wing structure and twin rudders, but features an expanded fuselage and turboprop engines. The airplane has length of 12.98 m, wingspan of 22.00 m and wing area of 39.7 sq m. The empty weight of Antonov An-28 is 3,900 kg, while maximum takeoff weight is 6,100 kg. The aircraft is driven by two Glushenkov TVD-10B or Pratt & Whitney Canada PT6A-65B turboprops, 960 shp (720 kW) each.