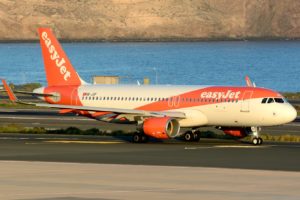 Easyjet aircraft Airbus A320-200 suffered smoke in the cockpit during a flight from Portugal to Geneva, Switzerland. The aircraft was on 110 miles southsouthwest from Clermont-Ferrand in France, when the crew decided to divert to closes airport, due to danger from development of the accident. The airplane descent to Clermont-Ferrand, but during the approach to the airport the smoke stopped. However, the Easyjet aircraft Airbus A320-200 landed safely to the French airport about 30 minutes later. The aircraft taxied to the apron where passengers were disembarked normally, without reporting injuries or any panic.

All the people were transferred to busses and taken to Geneva.

The emergency services arrived at the scene and inspected the entire aircraft, but did not found any fire or heat or another possible source of the smoke. The airplane remained on ground for further safety inspection.

Easyjet Switzerland reported that the aircraft diverted due to a possible technical problem.

Aircraft Airbus A320-200 is the founding member of the A320 family, the world’s first fly-by-wire jetliner family. The wide, comfortable cabin makes the aircraft popular with passengers and crew alike.