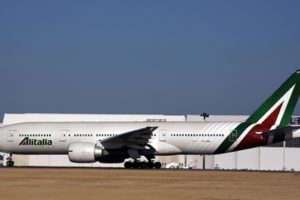 The British low-cost airline EasyJet has announced that it will not participate in the future rescue of the bankrupted Italian carrier Alitalia.

“After discussing with Ferrovie dello Stato Italiane (state operator of the Italian rail network) and Delta Air Lines to form a consortium to find solutions for the future work of Alitalia, easyJet decided to leave this process”, says the official statement of EasyJet.

EasyJet and Delta Air Lines planned to invest about 400 million EUR in Alitalia after the completion of its bankruptcy procedure, the second in a decade. At the same time, easyJet insisted on dividing the company and wanted to get its short-haul business.

At the same time, the easyJet management stresses that Italy remains one of its key markets. Every year, the company transports 18.5 million passengers to Italy, where it has three home airports – in Milan, Naples, and Venice. About 1,400 Italian pilots and flight attendants work in easyJet.

Delta Air Lines is still interested in the future participation of the rescue of Alitalia and continues negotiations. Negotiations are also underway with Lufthansa, which insists on a significant reduction in the state share in Alitalia – by about 40%.

Alitalia, formerly a state-owned company, has been in a crisis in recent years. Since 1999, the company has not been making a profit. In 2016, the loss of Alitalia, which employs about 11,000 people, amounted to about 500 million EUR. The latest official reporting of the air carrier was published in 2015.