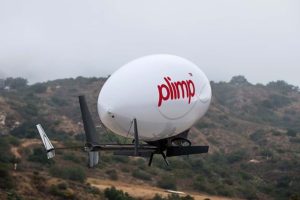 The American company Egan Airships has announced its intention to develop a passenger version of a hybrid airship, according to the designers, from a sharp fall in the event of an engine shutdown. The prospective machine was designated Model J. It is proposed to be used, in particular, for sightseeing tours or transportation of various cargoes.

The hybrid airships are very similar in appearance to normal airships, but belong to a different class. They are heavier than air vehicles. Part of the lifting force in them creates gas volumes, usually filled with helium, the other part – engines with propellers, and the rest – the body during horizontal flight (according to the principle of the aircraft).

The Model J will receive one gas volume with helium, which will be installed on top of a small glider with a tail unit and a swivel wing. The electric fans will be placed on the wings of the aircraft. Under the airframe, the developers will place a passenger-and-cargo capsule designed for carrying 8 or 10 people.

It is assumed that the hybrid airship will take off and land vertically. To do this, its wing will rotate vertically, setting the fans parallel to the ground. In flight, the wing will return to a horizontal position. The developers claim that even with the loss of power and stopping of all electric motors, the device will not fall, but will gradually fall to the ground.

In the cargo version, Model J can carry up to 907 kilograms of cargo. The device with a length of 42.6 m will be able to fly at a speed of 150 km/h, and its range will be about 2,100 km. Egan Airships has already conducted a series of flight tests of an unmanned hybrid airship model, which is positioned as a device for reconnaissance and agricultural work.