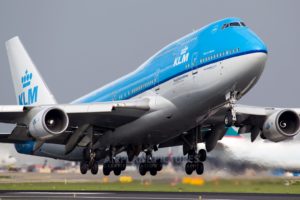 Eight people were injured during severe turbulence on board of KLM airplane Boeing 747-400 near Hong Kong. The airplane was en route from Amsterdam to Hong Kong, but at approach to the airport of destination on just 30-40 minutes before landing encountered severe turbulence for several seconds. Some passengers were thrown to cabin ceiling and then on the floor, suffering from injuries. The KLM airplane Boeing 747-400 safely landed in Hong Kong’s runway 25R and eight people, including 6 passengers and 2 crew, were taken by ambulances and transported to the hospital for medical treatment. Only 3 passengers remained at the hospital with more serious hurts, while other were released.

The local authorities initiated investigation for the root cause of the accident. According to witness evidences turbulence lasted 3-4 seconds and everything, which was not properly secured was thrown to the ceiling.

The airplane was not damaged during the incident. However, the local authorities followed strict inspection of the airplanes Boeing 747-400 before allowing the departure for the return flight. The aircraft remained on the ground in Hong Kong for 7 hours.

The airplane Boeing 747-400 (registration PH-BFR) is four-engine wide-body aircraft. It is equipped with a two-crew glass cockpit, which dispenses with the need for a flight engineer, along with more fuel-efficient engines, an optional fuel tank in the horizontal stabilizer, and revised fuselage/wing fairings. The length of the aircraft is 70.66 m, wingspan is 64.44 m and wing area is 525 sq m. The plane has maximum capacity for 416 passengers.