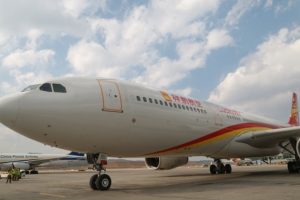 Elderly woman threw coins into the engine of airplane during boarding at Anqing Airport in China. The flight 8L9960 of Lucky Air was canceled after the aircraft crew and airport employees noticed the 76-year-old passenger to throw several coins into the liner engine. The reason for this action is still unknown, but the airline cancelled the flight and safety inspectors made careful check of the aircraft before allowing it to fly again.

The airport staff noticed the incident on time and delayed the departure of the aircraft. The flight was scheduled for Wednesday at 15.40 (12.40 Moscow time), but due to an incident to ensure the full safety of passengers and a full-fledged check-out. The elderly woman was detained and the local law enforcement agencies are investigating the incident.

Upon further checks, a coin was found on the ground nearby

A similar incident occurred in June 2017, when a CZ380 flight from Shanghai to Guangzhou with 150 passengers on board was postponed after airport employees detained a passenger who threw coins into the engine of the aircraft. Later it turned out that the old woman threw coins for good luck, and because of her old age, the authorities decided not to subject the woman to any punishment.