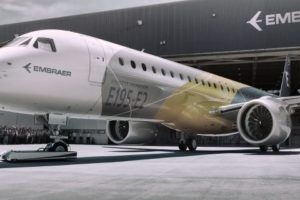 Embraer and Boeing agreed on a strategic partnership that allows both companies to accelerate growth in global air markets. According to the stipulated conditions, a joint venture will be created, which includes the Embraer civilian aircraft and services business, 80% of whose shares will belong to Boeing, while Embraer will own the remaining 20%.

The deal is subject to approval by the Brazilian government, after receipt of which Embraer and Boeing intend to finalize the final documents. To close the transaction will require the approval of shareholders and government agencies, as well as compliance with other standard procedures.

In accordance with the terms of the planned partnership, 80% of the shares of the joint venture, the value of which is 4.2 billion USD, will belong to Boeing. The partnership is not expected to affect Boeing’s earnings per share in 2020 and will lead to growth in the future. According to preliminary estimates, the annual synergy of expenses before tax will be about 150 million USD by the third year of the joint venture.

After closing the deal, the joint venture will be headed by the Brazilian leadership, including the presidency and the chief executive officer. Boeing will receive operational and administrative control within the new company, which will be directly subordinated to Dennis Muilenburg, chairman of the board of directors, president and chief executive officer of Boeing. Embraer will retain the right to vote on certain strategic decisions, such as transferring operations from Brazil.

“Boeing and Embraer are well acquainted with the cooperation that lasts more than two decades, and since the announcement of our joint activities earlier this year, mutual respect between companies and the value that we see in this partnership has only increased”, said Dennis Muilenburg.

“We are convinced that our partnership will bring tremendous value to Brazil and the aerospace industry as a whole. This partnership will strengthen the position of both companies in the global market, and it is also in line with our long-term strategy of sustainable growth”, said Paulo Cesar de Souza e Silva, CEO and President of Embraer.

In addition, the companies agreed on the terms of another joint venture to promote and develop new markets for the KC-390 multi-purpose medium-haul transport aircraft. Under the terms of the planned partnership, Embraer will own 51% of the shares of the joint venture, and Boeing will receive the remaining 49%.

The deal is subject to approval by the Brazilian government, as well as ratification by the Embraer board of directors to begin finalizing the agreements. After completing all the agreements of the transaction will require the approval of shareholders and government agencies, as well as compliance with other standard conditions for closing the transaction. If all approvals are received in a timely manner, it is expected that the transaction will be closed by the end of 2019.