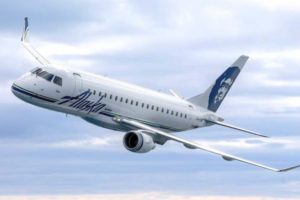 The Brazilian aircraft manufacturer Embraer was awarded with contract for 25 E-Jet aircraft by SkyWest. The airplanes are of the first generation of narrow-body medium-range twin-engine jet airliners. The total catalog value of the contract is 1.1 billion USD. All 25 planes are scheduled to be delivered in 2018.

Embraer E-Jet family is a series of narrow-body medium-range twin-engine jet airliners, carrying 80 to 124 passengers commercially. Launched at the Paris Air Show in 1999, and entering production in 2002, the aircraft series has been a commercial success primarily for its safety and efficiency. Embraer E175 is powered with General Electric CF34-8E engines of 14,200 pounds (62.28 kN) thrust each.