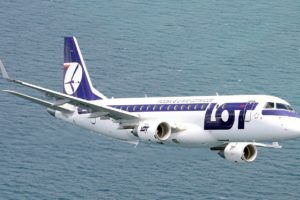 The Brazilian aircraft manufacturer Embraer delivered its 1400th E-Jet to customers. The jubilee E175 was transferred to American American Airlines Group Inc., which will operate the liner in its subsidiary Envoy Air. The solemn ceremony was held at the company’s factory in San Jose dos Campos (Brazil).

American Airlines has been the operator of Embraer airplanes for almost 20 years, and the subsidiary airline, Envoy, is one of the first ERJ aircraft operators and currently has more than 100 ERJs in its fleet, the company explained.

“The E-Jet program, one of the most successful airplane programs in history, played an important role in the formation of the aircraft market, with a seating capacity of 70 to 130 seats, which we see today. And to celebrate the 1,400th delivery of E-Jet with our long-time friends, American Airlines and Envoy, this is really a special moment for us”, said the President and CEO of Embraer Commercial Aviation, John Slattery.

Embraer E-Jet family is a series of narrow-body medium-range twin-engine jet airliners, carrying 66 to 124 passengers commercially. The series has been a commercial success primarily due to its ability to efficiently serve lower-demand routes while offering many of the same amenities and features of larger jets.