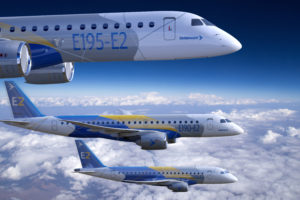 The Brazilian aircraft manufacturer Embraer delivered 22 passenger aircraft to customers in the first quarter of 2019, of which 11 were commercial aircraft and 11 were executive jets (8 light and 3 large). As of March 31st, the firm order backlog totaled 16.0 billion USD.

In the first quarter, Embraer delivered the first E175 jet to Mauritania Airlines, which is also the first unit of this model to the African continent. The airline signed a firm order for two E175 jets in 2018. The contract has a value of 93.8 million USD at current list prices.

In April, Embraer signed a firm order for 10 E195-E2 jets with Nigeria’s largest airline, Air Peace, which will become the first E-Jets E2 operator in Africa. The contract includes purchase rights for a further 20 E195-E2. With all purchase rights being exercised, the contract has a value of 2.12 billion USD based on current list prices. This order will be included in Embraer’s Q2 2019 backlog.