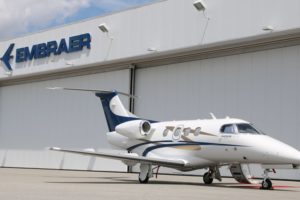 The Brazilian aircraft manufacturer Embraer delivered 39 aircraft in Q3 2018, including 15 commercial aircraft (thirteen E175 and two E190) and 24 business jets. The company, which is in the process of selling 80% of its commercial jet division to Boeing, reported that it had an order backlog that accounted for $13.6 billion at the end of September, down from $17.4 billion in the second quarter.

Embraer forecasts in its Market Outlook a demand for 10,550 new aircraft with up to 150 seats worldwide over the next 20 years. The in-service fleet is set to increase to 16,000 aircraft, up from the 9,000 aircraft currently in operation. Market growth will drive 65% of this demand, while the remaining 35% of the projected demand will be to replace ageing aircraft.

Embraer and Helvetic Airways signed a contract for a firm order of 12 E190-E2 jets during Q3 2018. During the period, Embraer also signed a contract with an undisclosed customer for up to five E195-E2s, being three firm orders and two purchase rights. The Company continues to work on finalizing its recent LoI signed at the Farnborough Airshow for 100 E175 aircraft for Republic Airways, with the expectation that a significant portion of these jets should enter the Company´s backlog by the end of 2018.

Embraer S.A. is a Brazilian aerospace conglomerate that produces commercial, military, executive and agricultural aircraft and provides aeronautical services. It is headquartered in Sao Jose dos Campos, Sao Paulo. The company is the third largest producer of civil aircraft, after Boeing and Airbus.