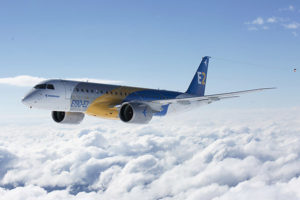 The second-generation Embraer E190-E2 received certificates from the Civil Aviation Agency of Brazil (ANAC), the US Federal Aviation Administration (FAA) and the European the Aviation Safety Agency (EASA).

“Thus, the Embraer E190-E2 became the first liner of the family of commercial aircraft E-Jets of the second generation, certified by ANAC, FAA and EASA. For the first time the aircraft program with a similar E2 level of complexity receives a certificate of the type from three major world certification bodies at the same time. Since the launch of the program until the receipt of type certificates have passed only 56 months”, said the official statement of Embraer.

In comparison with the family of E-Jets of the first generation, the second-generation aircraft are equipped with new engines and wings. On board of the E190-E2 liners almost 75% of the aircraft systems are new.

In the flight test program participated four prototype aircraft. The test fleet E190-E2 flew more than 2,000 hours. In addition, about 45,000 hours of testing were conducted on the ground, in laboratories for testing avionics, flight control testing, and monitoring the operation of electrical, hydraulic and environmental systems.

Embraer also stated that the second-generation E-Jets family is the most efficient among all narrow-bodied aircraft in its class in the market. The fuel efficiency of the E190-E2 was 1.3% better than expected, which is 17.3% better than the current generation E190. E190-E2 also becomes the most environmentally friendly aircraft in its class with minimal levels of external noise and emissions.

The results of the flight tests, according to Embraer, also confirmed that the E190-E2 will be better than its original specification during the take-off phase. The aircraft’s range from airports located in hot climates or highlands, such as Denver and Mexico City, is increased by 600 miles (1,100 km) compared to the current generation aircraft. The range of new-generation aircraft from airports with short runways, such as London City, is increasing by more than 1,000 miles (1,850 km), which allows liners to reach cities such as Moscow or northern Africa.

The company also noted that the E190-E2 becomes the aircraft with the longest interval between those in the narrow-bodied market, which is 10,000 flight hours for basic inspections. This means that for ten years of operation, the aircraft will work 15 days more than the current generation of the E-Jet family. Another key target program, in which the E190-E2 got better results than the initial expectations, is the training time for the pilots. Pilots of the E-Jet family of the first generation, with the transition to the second generation, will need only 2.5 days of training.

Recall, the starting customer for the E190-E2 is the largest regional Scandinavian airline Widero. The receipt of the first aircraft is expected in April. The airline has a contract for the purchase of up to 15 E-Jets of the second generation.