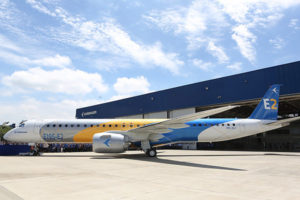 The E195-E2 is the second-generation E-Jet and the largest commercial aircraft ever built by Embraer.

“As with the E190-E2, we again received type certificates from three of the world’s largest regulatory authorities”, said Paulo Cesar de Souza e Silva, President and CEO of Embraer. “This is another great achievement of our teams. They built and received a certificate for the most efficient medium-range aircraft on the market. And they did it again on schedule”, added he.

The first aircraft E195-E2 will go into operation in the second half of 2019 in the fleet of Azul Linhas Aereas Brasileiras S.A.

“Our flight tests confirmed that the aircraft was better than its original specification. Fuel consumption is 1.4% lower than expected – this is 25.4% less fuel per seat compared to the first-generation E195. Maintenance costs are 20% lower. There is no doubt that the airlines will like the economy of this aircraft. The E195-E2 is the ideal liner for the growing regional air traffic market”, said John Slattery, President and CEO of Embraer Commercial Aviation.

Embraer emphasized that the E195-E2 is the most environmentally friendly aircraft in its class. It has the lowest levels of external noise and emissions. In addition, like the E190-E2, the E195-E2 has the longest maintenance intervals in the narrow-body jet aircraft category — 10,000 flight hours.

E195-E2 is equipped with new engines, wing and chassis. Compared to the first-generation E195, 75% of aviation systems are new. The passenger cabin is designed to carry up to 120 passengers in a two-class layout, or up to 146 passengers in a single class.