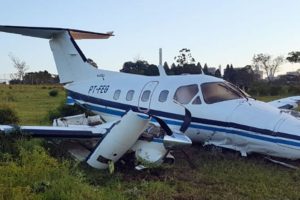 Twin-turboprop business jet Embraer EMB-121A1 Xingu II made a hard emergency landing in farmland field near residential buildings in Jardim Bassoli in Campinas, Brazil. The aircraft lost the attitude while trying to divert to Campinas Viracopos International airport and the pilot was forced to make an emergency landing on an open field. Fortunately, all five people on board survived without significant injuries. However, the aircraft suffered substantial damage.

The aircraft Embraer 121A1 Xingu 2 left Sorocaba and headed towards Palmas, capital of Tocantins with two pilots and three passengers, who were lawyers from Sao Paulo. The pilot experienced some technical problem and during the flight decided to return to Campinas Viracopos International airport, but on about 3 miles from the runway of the airport lost the attitude and was forced to land. The hard landing was successful and all the people from the aircraft survived.

Embraer EMB 121 Xingu II is a twin-turboprop fixed-wing aircraft built by the Brazilian aircraft manufacturer, Embraer. it has seating capacity for 9 people and engine PT6A-135.