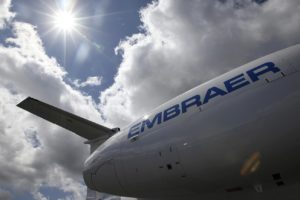 Brazilian aircraft company Embraer delivered 35 commercial aircraft and 24 business aircraft to customers in the second quarter of 2017, released the press service of the manufacturer. The company reported decrease in production of business jets, accumulating decrease of more than 20% in the first half of the year. This was largely due to the absence of the Legacy 450 from last year’s tally. However, the promising report of commercial aircraft keeps them optimistic.

“The number of deliveries in the commercial aviation segment increased by approximately 35% compared to the same period of 2008. As for business aviation, this segment delivered five more aircraft than in the second quarter of 2016, although in general the company production is less than an year ago”, noted Embraer.

The second quarter of 2017 marked the handover of Embraer’s 1100th business jet, a Phenom 300, 15 years after it informally entered the business aviation market with the shipment of a VIP-configured ERJ-135 airliner.