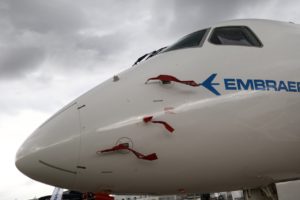 Shareholders of Brazilian aircraft manufacturer Embraer approved the deal to sell 80% of the company’s commercial plane division to Boeing, forming a joint-venture which will compete with Airbus in the market for jets with up to 150 seats.

The proposal passed with 96.8% votes in favor of the transaction, while participation in the vote equated to 67% of all outstanding shares. The transaction values Embraer’s commercial aircraft operations at 5.26 billion USD and Boeing’s 80% share at 4.2 billion USD.

Thus, Boeing will fully control the new enterprise. The deal with Boeing concerns only the Embraer commercial aircraft division, on the basis of which the joint venture will be created. Divisions for the creation of business and military aircraft in the transaction to create a joint venture does not appear.

Embraer shareholders also agreed to a joint venture to promote and develop new markets for the multi-mission medium KC-390 airlifter. Under the terms of that proposed partnership, Embraer will own a 51 percent stake in the joint venture and Boeing the balance. Embraer’s defense and executive jet business and services operations associated with those products would remain a standalone, publicly traded company.

“This groundbreaking partnership will position both companies to deliver a stronger value proposition for our customers and other stakeholders and create more opportunities for our employees. Our agreement will create mutual benefits and boost the competitiveness of both Embraer and Boeing”, said the President and CEO of Embraer, Paulo Cesar de Souza e Silva.

On Friday, a court in Brazil suspended negotiations on the creation of a joint venture (JV) between the American aircraft manufacturing concern Boeing and a commercial aircraft development unit of the Brazilian company Embraer. The decision was appealed in the high court and the date for the meeting of shareholders was confirmed for February 26.

The Brazilian government has already approved the creation of a Boeing and Embraer joint venture.