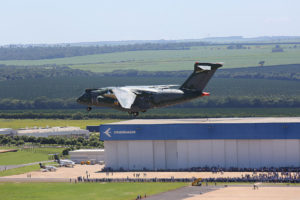 In coordination with the Brazilian Air Force, the aircraft began to undergo an extensive flight test program, under which it would have to spend about 1,900 flight hours in the air. In addition to military certification, the aircraft will also receive a civilian one, which will be conducted by the Brazilian National Civil Aviation Agency and which is expected to be completed by the end of the year.

“Today we are celebrating the beginning of another important stage in the development program of the KC-390. This aircraft combines exceptional flexibility in its use and superior performance”, said Jackson Schneider, President and CEO of Embraer Defense & Security.

Embraer KC-390 is a tactical transport aircraft designed to set new standards in its category at minimal cost of operations. It can carry out many missions, such as delivery of oversized cargo, air refueling, search and rescue, landing and fighting forest fires.

The development of the Embraer KC-390 has been underway since 2007. In addition to Brazil, the project also involves the Czech Republic, Portugal, Colombia and Argentina. The first flight of the aircraft took place in February 2015. The Embraer KC-390 has a length of 33.40 m, a height of 11.40 m and a wingspan of 33.90 m. The maximum take-off weight of the aircraft is 81 tons.