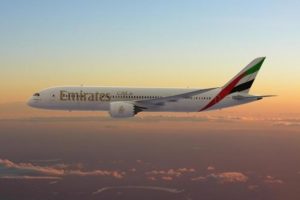 The largest airline in the Middle East, Emirates Airline, has agreed to buy 40 Boeing 787-10 Dreamliner aircraft for total amount of 15.1 billion USD. The announcement was made by Emirates Chief Executive Officer, Ahmed bin Saeed Al Maktoum, at the Dubai Airshow in Dubai. The news came after a delay of several hours amid rumors of a possible Airbus deal for the A380.

“We compare two apples, but we found that the Boeing 787 was the best option for Emirates”, said Ahmed bin Saeed Al Maktoum in a journalistic question about Boeing’s European rival.

Deliveries of the aircraft are expected to start in 2022.

Emirates is the largest customer of the Boeing 777. The Dubai-based airline has 165 such aircraft in its fleet and claims orders for another 164.

Dubai Air Show, which is being organized every two years, started today amid strong tensions between Saudi Arabia and Iran. The world’s largest defense companies present their combat aircrafts, drones, armored vehicles and missiles. At the beginning of the Air Show, Emirates introduced new first class private apartments that will be available at Boeing 777.

The exhibition runs until November 16th.