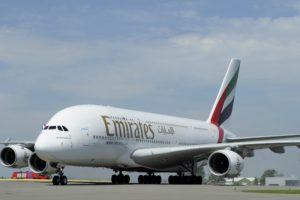 The United Arab Emirates (UAE) operator Emirates Airline signed an agreement with the European aircraft manufacturer Airbus to finalize the sale of 20 A380s with an option for another 16 aircraft. The information was released by the French Prime Minister Edouard Philippe. He described the deal as a great news for French aircraft and for European industry as a whole.

On January 18, Emirates announced a 16 billion USD deal to purchase another 36 aircraft Airbus A380.

Emirates is the airline with the largest number of the European A380 aircraft, operating 101 planes plus 41 hard orders.

Airbus had previously said it would have to end production of the A380 if it failed to secure the huge Emirates deal.

At the end of his two-day visit to the UAE, Edouard Philippe highlighted the great transformation that took place in France, with the choice of “opening” and the new “generation” embodied by President Emmanuel Macron.

The French Prime Minister was a guest at a regular annual World Government Summit.