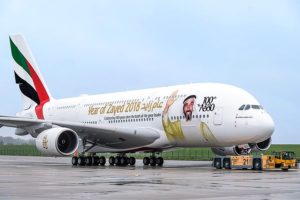 Emirates Airlines celebrates 10 years from the beginning of the operation of the Airbus A380. From the first flight from Dubai to New York on August 1, 2008, more than 105 million passengers were transported by Emirates on board of the A380, carrying 115,000 flights and overcoming a distance of 1.5 billion kilometers, equal to 39,000 round-the-world voyages

Emirates is the world’s largest operator of Airbus A380, performing flights on 104 two-deck airliners. They fly to 49 cities on six continents, making more than 80 daily flights from Dubai.

In addition to the fleet of 104 A380 Emirates awaits the delivery of another 58 aircraft of this type. To date, Emirates is carrying out the shortest A380 flight on the Dubai-Kuwait route, as well as the longest non-stop flight from Dubai to Auckland. The airline also increased the number of scheduled flights to major airports in the world and demand at regional airports, including Manchester, Brisbane, Kuala Lumpur, Houston, Prague, Kuwait, Mauritius, Johannesburg and Sao Paulo.

“It’s been 10 amazing years since the first Emirates A380 flight. Today it is one of the most recognizable and admirable airliners in the world”, said the President of Emirates, Tim Clark. “Passengers like to travel on it thanks to spacious lounges that make flying comfortable in all classes of service, and the famous Onboard Lounge, Shower-SPA and personal First Class cabins, which have brought air travel to a new level. We continue to strive to provide customers with the best service on board and continue to innovate in order to continue to surprise customers traveling with us. Emirates A380 also had a significant impact on the aviation industry and its highly efficient supply chain, providing jobs to thousands of skilled workers and significant economic advantages for countries where the A380 production facilities are located”, added he.

The Airbus A380 is a double-deck, wide-body, four-engine jet airliner manufactured by European manufacturer Airbus. It is the world’s largest passenger airliner, and the airports at which it operates have upgraded facilities to accommodate it. It was initially named Airbus A3XX and designed to challenge Boeing’s monopoly in the large-aircraft market. The A380 made its first flight on 27 April 2005 and entered commercial service on 25 October 2007 with Singapore Airlines. An improved version, the A380plus, is under development.