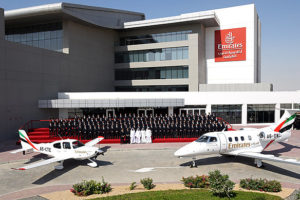 The Emirates Flight Academy was officially opened by the Vice President and Prime Minister of the United Arab Emirates Mohammed bin Rashid Al Maktoum, during Dubai Airshow. The academy was create for pilots training centers not only in the Middle East, but throughout the world.

Among the first persons at the opening ceremony were Sheikh Mohammed bin Rashid Al Maktoum, Sheikh Hamdan bin Mohammed Al Maktoum, as well as members from the Board of Directors of Emirates Airline.

“The Emirates Flight Academy was created to become one of the most advanced pilots training centers not only in the Middle East, but throughout the world. It is the only academy in the world that fully unites under one roof a flight training school, a ground training school, as well as a residential area and a recreation area”, said Sheikh Ahmed bin Saeed Al Maktoum, the Chairman and CEO of the airline and group of Emirates Airlines. “The students will not only receive a better education, but will also be able to enjoy comfortable living conditions during their studies. The Academy will establish new standards for the quality of training pilots of the next generation, relying on innovation and cooperation with industry schools. This will help strengthen Dubai’s position as a global aviation hub”, added he.

Located in the south of Dubai, the Emirates Flight Academy was established to train citizens of the UAE and international students. It will train the students in the culture of the airline and prepare pilots for the future requirements of the aviation industry, in particular, Emirates Airlines. The Academy will combine advanced training technologies and a modern fleet of training aircraft to train cadets with no flying experience. The cadets will be trained in simulators, single-engine and multi-engine aircraft, and will also receive theoretical knowledge of the aviation industry for an easier transition to the aviation business. The investment in the school emphasizes Emirates Airlines, as the world leader in aviation to create a modern infrastructure to help prepare pilots for Emirates and the aviation industry as a whole.

Emirates Flight Academy was first announced at the 2011 Dubai Airshow. Construction of the facility began in 2015, and at the beginning of this year, ground facilities were built and the first phase of construction of residential premises was completed.

The Emirates Flight Academy is a campus located on an area of ​​164,000 sq m. It includes 36 classrooms, ground simulators, an air fleet consisting of 27 training aircraft, an 1800-meter dedicated runway with modern navigation and lighting facilities, an autonomous tower of the air traffic control service, a rescue and fire service, as well as a technical center service. The male and female cadets admitted to the program will have access to individual modern studios for living in addition to a variety of sports and entertainment complexes. The Academy will be able to accommodate up to 600 cadets at a time.

Newer PostNet profit of EasyJet dropped by 30.2% in fiscal year 2016-17
Older PostSingapore Airlines was awarded for the “Best Asian Airline”