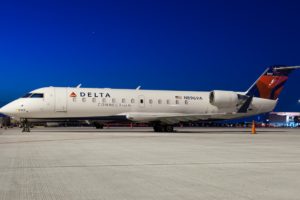 Flight of the American airline Endeavor Air delayed because of a squabble between the pilot and the flight attendant. The incident occurred on July 24 at the New York airport of La Guardia. Endeavor Air flight 3925 was scheduled to leave airport in New York City at 11:30 a.m. on Monday, but just prior to boarding, a heated argument broke out between a 54-year-old male pilot and a 26-year-old female flight attendant.

An eyewitness said that the pilot had insulted his opponent with obscene language. “His statements were racist, rash and unprofessional”, said the witness of the incident.

As a result, on board of the aircraft came six policemen who interrogated the pilot and the stewardess, as well as their colleagues. The cause of the conflict is unknown. Disappointed employees of the carrier were removed from the voyage and replaced by others.

No arrests are reported to have been made.

For this reason, a flight to the city of Portland was detained for two hours. Endeavor Air and its parent company Delta Airlines apologized to the travelers for the inconvenience caused.