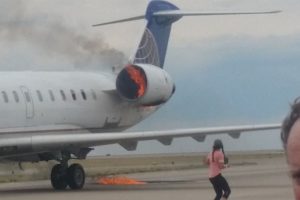 Engine of Skywest Airlines airplane Bombardier CRJ-700 caught fire after landing at Denver’s runway 34R. The aircraft landed safely after a flight from Aspen with 59 passengers and 4 crew, but left hand engine (CF34) started burning. The aircraft immediately stopped taxiing and all the passengers were disembarked via aircraft stairs. There were no reported injuries among the people, who were transported by bus to the airport.

Emergency services were deployed immediately at the scene of the burning airplane. They sprayed the left hand engine and quickly extinguished the fire. The runway inspection found no debris on the runway.

The local authorities initiated investigation for the root cause of the accident. The airplane will be repaired and inspected before return in service.

According to the preliminary information, the tyre fire spread to the engine. There were no injuries, the damage is being assessed.

Bombardier CRJ-700 is regional airliners manufactured by Bombardier. Design work on the CRJ700 by Bombardier started in 1995 and the programme was officially launched in January 1997. Seating ranges from 63 to 78. The airplane has length of 32.30 m, wingspan of 23.20 m and wing area of 70.60 sq m.