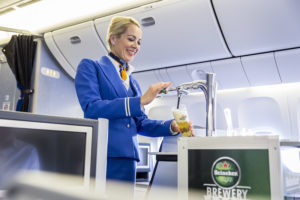 The English brewing company BrewDog will launch the first ever “beer flight” in 2019. The departure of the Boeing 767 is scheduled for February 21 from London Stansted Airport to Ohio Airport, USA, where one of the breweries BrewDog and The DogHouse Hotel is located. On board, passengers will be able to taste specially prepared beer.

The beer manufacturers say that they managed to create a drink, the taste of which is different from the usual, when a person flies at an altitude of nine thousand meters.

“Our passengers will be able to participate in the world’s highest beer tasting. Taste buds work differently during the flight, so our brewers invented beer that will taste better when a passenger drinks it in the sky, not on the ground”, said representatives of BrewDog.

In February, BrewDog Brewery announced the opening of the world’s first beer hotel in 2019. The hotel will be located at the company’s headquarters, offering visitors 26 designer rooms.