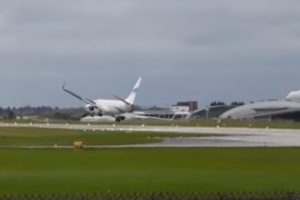 Enter Air plane Boeing 737 was made hard landing attempt during storm in Salzburg, Austria. The aircraft was performing a flight from Frankfurt/Main (Germany) to Salzburg (Austria), but tried landing at storm and was caught by strong gust, causing the right wing to drop. The crew initiated a go around and entered the hold at Salzburg. About 5 minutes after the go-around the crew advised they needed to return to Frankfurt, ATC filed a new flight plan. There were no reported injuries during the accident. All the people were transferred to Salzburg by alternative transport.

The Enter Air plane Boeing 737-800 remained on ground for several hours for inspection. it was estimated that suffered slight damages, which were repaired and after that was resumed to return in service.

The investigation for the root cause is under way.

Boeing 737 is a short- to medium-range twinjet narrow-body airliner. Originally developed as a shorter, lower-cost twin-engine airliner derived from the 707 and 727, the 737 has developed into a family of ten passenger models with capacities from 85 to 215 passengers. The 737 is Boeing’s only narrow-body airliner in production, with the 737 Next Generation (-700, -800, and -900ER) and the re-engined and redesigned 737 MAX variants currently being built.

The video of the scary accident can be seen here: