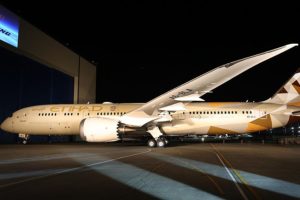 Etihad Airways passenger aircraft Boeing 787 Dreamliner completed the first multi-hour flight on biofuel. The liner’s tanks were filled with a mixture of conventional aviation fuel and biofuels in a ratio of 1 to 1. On this mixture, the aircraft made a flight from Abu Dhabi to Amsterdam, spending more than seven hours in the air.

Today, several companies in the world are developing new types of biofuels, which in the future could be used instead of the traditional hydrocarbon. It is believed that thanks to biofuels, it will be possible to reduce emissions of carbon dioxide, one of the main factors of global warming.

Previously, experiments have been conducted with flights of airplanes of various classes on biofuel made from used vegetable oil, animal fats, sawdust, and some plant species. Several Middle Eastern companies are considering the possibility of mass production of biofuels from plants that can grow in the coastal marine belt with high salinity of the soil.

The special fuel used was produced in the UAE through the Sustainable Bioenergy Research Consortium (SBRC), a non-profit entity established by Masdar Institute, part of the Khalifa University of Science and Technology.

The completed flight of the liner is recognized as completely successful. Refinement of the liner engines or its fuel system for refueling with a mixture of kerosene and biofuels was not required.

Etihad Airways is the flag carrier and the second-largest airline of the United Arab Emirates. Its head office is in Khalifa City, Abu Dhabi, near Abu Dhabi International Airport. Etihad commenced operations in November 2003.