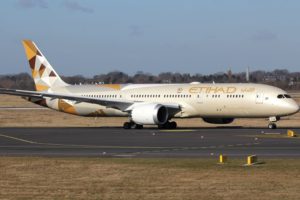 Etihad Airways deployed the modern airplane Boeing 787-9 on a regular daily flight from Abu Dhabi to Beirut. The Dreamliner will replace the Airbus A321, which operated the flights to the capital of Lebanon. On board the ultramodern aircraft there are 299 seats, including 28 studios in the business class and 271 smart chairs in the economy class.

“Beirut was the first international destination for Etihad Airways in 2003, so it’s only natural that today we launch our flagship Dreamliner 787 on this key For the company market”, said the executive vice president of sales for Etihad Airways, Mohammed Al Bulooki. “This aircraft type in a two-class configuration offers 125 additional seats on each flight, which increases the total number of seats on the route to 4,186 per week. This, in turn, will satisfy the high demand for flights from Lebanon to Abu Dhabi”, added he.

Boeing 787 is the flagship aircraft of Etihad Airways. On board the guests are offered a revolutionary level of comfort and quality of service. So, on flights to Beirut to the services of economy class travelers with small children there will be multimedia to enjoy them during the flight.

Guests of the business class on board the Boeing 787 can appreciate the space increased by 20% in comfortable studios, as well as armchairs upholstered and unfolding in a full two-meter bed. The armchairs are equipped with a built-in massager and a headrest with side support. In addition, business guests can use a personal touch screen with a diagonal of 18 inches and noise-canceling headphones.

In the economy class are located “smart” armchairs with a width of almost 50 cm with a unique support system for the head “fixed wing” and the function of lumbar support, as well as personal screens with a diagonal of 11 inches. The aircraft is equipped with the newest climate control system, which allows you to adjust the level of humidity and pressure in the cabins.

tihad Airways’ Boeing 787 Dreamliner features with the latest entertainment system, which offers guests of all classes access to more than 750 hours of diverse content, including movies, music and games on high-resolution screens.

In addition, due to the high season and increased demand for tickets between August 2 and September 10, Etihad Airways will add four additional Abu Dhabi-Beirut flights per week, which will be carried on the Airbus A320 on Mondays, Wednesdays, Fridays and Sundays.