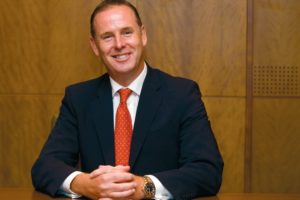 Prior to joining Etihad, Tony Douglas worked at the UK Department of Defense, as Director General of the Department of Military Equipment Operations, in charge of procurement and technical support of equipment for the British Armed Forces. In Britain, Tony Douglas held senior positions at BAA, the largest airport operator, and as executive director and interim CEO of Laing O’Rourke. At BAA, Tony worked as Managing Director of Terminal 5 of London Heathrow Airport, the Director of the Supply Chain Group, the Technical Director, and the General Manager of Heathrow Airport.

Tony Douglas also worked in leading positions in the UAE, in particular, the general director of Abu Dhabi Airports and Abu Dhabi Ports, working on the opening of the port of Khalifa in Abu Dhabi.

“We are happy that Tony decided to return to Abu Dhabi to head Etihad. He not only took direct part in the transformation of large organizations of the United Arab Emirates and Great Britain, but also is perfectly familiar with the specifics of our region. In addition, Tony Douglas is a professional in the field of commercial aviation and is perfectly familiar with the goals and objectives of our company in a rapidly developing air industry”, said Mohamed Mubarak Fadhel Al Mazrouei.

As CEO of Etihad Aviation Group, Tony Douglas will work directly with the board of directors and top management, embodying the adopted development strategy in the face of constantly growing competition on both the regional and global air transportation market.

“Etihad is a powerful player in the global aviation market, which must continue to develop and interact with partners”, said Tony Douglas in his first statement after the appointment. “This is the driving force for the economy and the labor market both in the UAE and in the region as a whole. Together with modern infrastructure, an expanded airport, the Louvre and the Financial Center of Abu Dhabi, Etihad takes on an important role in maintaining the image of the UAE as a global transport, tourist, commercial and cultural center”, added he.