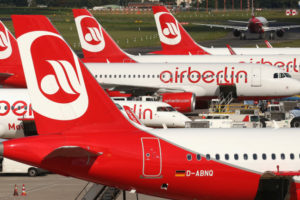 The European Union’s antitrust authority gave green light for easyJet to acquire portions of the assets of the bankrupt German Air Berlin. The airline easyJet will take 1,000 of the pilots and crew of the German company, 25 A320 aircraft, the leasing of which is still paid, and part of operations at Tegel Airport in the capital.

The European Commission, which is scheduled to decide on the deal by December 12th, declined to comment. The move will help the British carrier strengthen its position in Berlin against Irish Ryanair and the Lufthansa-owned budget airline Eurowings.

The transaction value is about 40 million EUR. Аіr Berlin already agreed to sell its Austrian airline Niki to Lufthansa.

Once the deals is completed, easyJet will become the largest carrier in Berlin with 16 million seats, ahead of 10.7 million for the Lufthansa Group (including Eurowings, plus the LGW and Niki seats) and Ryanair on 5.9 million. But it is not yet clear how much Lufthansa and Eurowings will be able to expand in the capital and elsewhere. Lufthansa Chief Executive Carsten Spohr said on Monday the group was willing to take over Niki with virtually no slots if it meant getting EU approval for the deal.