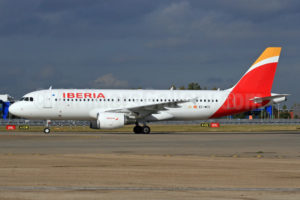 European airlines cancel flights to Venezuela due to political tension in the country. The Spanish airline Iberia canceled the flight Madrid-Caracas-Madrid, which was due to take place on August 2 due to continuing operational difficulties and security issues. In a statement, the airline informed that it plans to resume flights to Caracas on Thursday, August 3, “taking advantage of higher capacity airliner to carry passengers who could not fly before”.

According to the Spanish company, passengers affected by these measures will be offered alternative options, including the ability to fly another day on a different route or refund the ticket.

The company adds that “it continues to monitor the development of the situation in Venezuela and will inform its customers of any changes that occur in the flight schedule”.

Previously, Iberia has canceled flights Madrid-Caracas-Madrid scheduled for July 30, when Venezuela held elections to the National Constituent Assembly in connection with the “delicate situation” in the country, “the difficulty of the security and operation”.

Earlier, the French airline Air France, declaring July 28 to suspend its flights from Paris to Caracas, between July 30 and August 1 “due to the situation in Venezuela”.