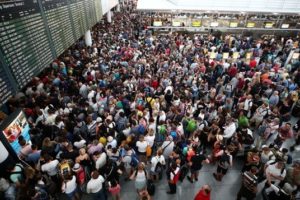 Europe’s major airport operators are provoking envy with their good results. The operator of the Paris airports, ADP, reported revenue growth of 37% in the first half of the year, and the sector as a whole reported steady growth and double-digit margins.

The common between large airports and luxury goods is that they are rare and therefore expensive resource. Of the 100 major airports in the world with more than 20 million passengers per year, 40 are already near the saturation point. And if air traffic grows according to forecasts, the airport deficiencies will be exacerbated in the coming years, especially in Europe.

All players in the air transport industry agree that at an average annual growth rate of 2% to 3%, the European airports will not be able to cope with air traffic. According to a recent study by the European Air Traffic Control Agency (Eurocontrol) by 2040, the difference between airport capacity in Europe and the needs of airlines may be on the order of 1.5 million flights, which means a loss of nearly 160 million passengers and 8% of the demand that will not be satisfied.

This will happen despite the resumption of investment and 111 European airports under construction that should lead to a capacity increase of 16% by 2035 and 28% in the 20 major airports of the Old Continent.

The reason is that, according to Eurocontrol forecasts, by 2040 the number of flights will increase by 53%. In the worst case scenario, where air traffic in Europe is growing almost doubled in the next 20 years, as happened between 1988 and 2008, 16% of demand will not be met in 2040. This is equivalent to 3.7 million missed flights, and 28 major European airports will be forced to work on the brink of their capacity to six at the moment.

For passengers, this situation at major European airports will mean more frequent and longer flight delays. According to Eurocontrol, the average delay may exceed 12 minutes reached in the peak of last summer and reach 20 minutes per flight in 2040. And the number of flights with one to two hours of delay will increase sevenfold. Thus, travelers affected by these delays for over an hour will increase from 50,000 per day this year to 470,000 per day in 2040.

To address this problem, the governments in Europe, which are experiencing a shortage of funds, are trying to attract private capital through partial or full privatization. According to the Association of Airport Operators, 41% of global traffic is already through private or partially private owned airports, and in Europe, which is a champion of privatization, the level even reaches 75%. The data of the Association of Airport Operators indicates that privatized airports have invested 12% more money than state-owned airports in the past five years.

However, this does not appease airlines that are worried about the lack of airport capacity and the amount of investment needed.

“Between 2006 and 2016, airport charges have risen more than doubled in Europe, while the average airfare price has fallen by 8%,” said the general director of International Association of Air Transport (IATA), Alexandre de Juniac. The privatization is not a magical medicine. Heathrow Airport in London, which became Europe’s first privatized in 1987, is now the most expensive and busiest airport on the Old Continent. However, this does not prevent British Airways from operating successfully there.