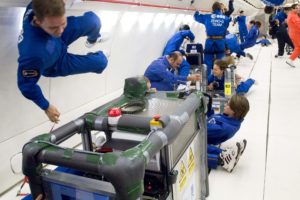 The European Space Agency (ESA) and aircraft manufacturer Airbus signed an agreement on a commercial partnership for the production, launch and management of the Bartolomeo platform. The new external payload platform, developed by Airbus, will be installed on the European Columbus module on the International Space Station (ISS) in mid-2019.

The agreement establishes the role and obligations of the parties in the project. Airbus will invest 40 million EUR to develop, create and launch an innovative platform. The ESA, in turn, will install a platform on the ISS. The platform will be launched in an unpressurized ISS compartment and installed in open space using robotic systems. Airbus will be responsible for operating the platform and installing the payload module. The platform will open new commercial opportunities for users around the world and will be useful in such areas as Earth observation, technology demonstrators, astro- and heliophysics, materials science, space instruments and commercial space exploration.

“Our task is to make access to the low orbit as simple as possible and to open the ISS to the global user community”, said the Head of Airbus Research Orbital Programs, Oliver Juckenhoefel. “We will allow public and private organizations to conduct research in space quickly and cost-effectively with a payload module. The cargo can be launched 18 months after signing the contract. Thanks to the integrated service, Bartolomeo users can concentrate on their work. We will take care of the rest: from launching and installing the platform to operations in space, communication and even the return of the research unit to Earth, if necessary”, added he.

“We are very pleased with this agreement: this is an important step towards a more active commercial operation of the international space station,” said the Director of Human and Robotic Exploration (D/HRE), David Parker. “ISS is one of the most interesting research centers of mankind. Thanks to the Bartolomeo platform and the unique concept of Airbus service, we will be able to offer more opportunities for users from a wide range of areas in the near future”, added he.

The Bartolomeo platform is named after the younger brother of Christopher Columbus. It is mounted on the outside of the Columbus module and is equipped with 12 payload compartments. The growing number of users of commercial payload class 100 kg make the platform in demand. Useful cargoes do not require maintenance by cosmonauts and can be operated outside the ISS. The platform is in development and has recently passed the stage of preliminary analysis of the design characteristics. The launch is scheduled for May 2019. It is assumed that the first payload slots will be installed on the platform in the second half of 2019. The launch of small loads was made possible thanks to a new cargo securing mechanism up to 125 kg and a volume of up to 0.5 cbm. The system was developed by Airbus partner Oceaneering Space Systems in Houston, Texas. Both companies are working on a system for docking the platform with the Columbus module with the help of the ISS robotics.