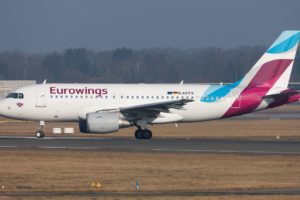 Eurowings airplane Airbus A319-100 rejected takeoff at high speed at Stuttgart’s runway 07 after bird strike and failure of the both engines. The aircraft was accelerating to take off from Stuttgart to Antalya (Turkey), when the left hand engine stopped after being hit by bird and a few seconds later the right hand engine also failed. The crew rejected takeoff and stopped clear at the track without reporting other damages or injuries.

According to the local authorities, the left hand engine ingested a bird causing severe damage to all fanblades. Moreover, fragments of the fan blades accelerated forward impacting the engine inlet as well as the slats/flaps and forward fuselage. Some parts of the damaged parts flew into the right hand engine, which also failed very soon after than. The fan blade of the right engine was damage.

All the people were disembarked from the troubled Eurowings aircraft Airbus A319-100 and transfered to another replacement plane.

The investigation for the root cause of the accident is under way. Fortunately there were no reported injuries.