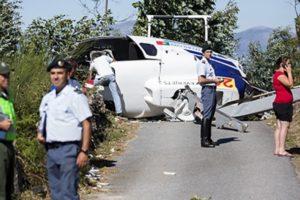 The Everjets helicopter, which took part in extinguishing wildfires in Portugal, crashed in the north of the country. Following the accident the pilot died. The incident occurred around noon near the village of Castro Daire. As reported, the helicopter was throwing water toward Cabril fire, but crashed into high-voltage cables, caught fire, and the pilot was trapped inside. According to preliminary data, only a pilot was on board the helicopter. Now the authorities conduct a search operation, which is complicated by the fact that fires continue to rage in the area of ​​the incident. Other circumstances of the incident are being clarified.

“The helicopter was attacking the fire at Cabril when it crashed after striking power lines”, said the commander of the ANPC protection agency, Rui Esteves. “It then caught fire, which caused the death of the pilot, the only person onboard”, added he.

Blazes in mid-June near Pedrogao Grande in central Portugal killed 64 people and injured more than 250. About 150 fires remain active in the country. Currently, more than 3,000 firefighters, 30 helicopters and airplanes are fighting with fire, including from neighboring Spain. In the overwhelming majority of cases (90% of fires) the fires were provoked by “human activities”, informed the Civil Defense.

The country has received reinforcements from abroad, including a Canadair water bomber from Morocco, three similar planes from Spain and three Super Puma helicopters from Switzerland.