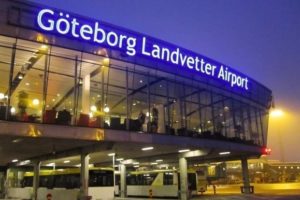 The police found explosives in the luggage of a 20-year-old German passenger at the Gothenburg airport in Sweden. The passenger was arrested and the local authorities initiated investigation of the accident.

The Gothenburg police reported that they are studying a suspicious object discovered at the local airport of Landvetter during security checks. The police cordoned off part of the premises near the departure hall. In the place of the profits of explosives, later the cordon was lifted.

The suspicious objects were containers with an explosive substance of acetone peroxide (TATP). It is noted that this substance is extremely difficult to detect, it was used in several terrorist attacks, including the terrorist attack in Paris in November 2015 and the explosion at the stadium in Manchester in 2017. The police have not yet confirmed the information about the discovery of the explosive.

The suspect was arrested by the police of Gothenburg. Law enforcers reported that he was traveling to another EU country. He was detained while undergoing security checks for domestic European flights. Other information about a suspected or potentially dangerous object was not reported by the police. The Swedish State Security Service told that they know about the incident, but at this stage they are not involved in the investigation.