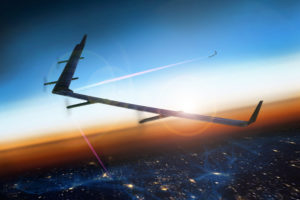 The unmanned aircraft Aquila, designed to distribute the Internet in hard-to-reach areas, made its first fully successful flight. According to a report by the Facebook, which is the company developing the device, the aircraft climbed into the air on May 22 and spent one hour and 46 minutes in the air after which landed successfully. It is alleged that, in part, the success of this flight was facilitated by the fact that all experts have studied the forecast on the strength and direction of the wind.

The first in the history of the unmanned aerial vehicle Aquila was the flight on June 28, 2016. Initially, it was planned that Aquila will be in the air for no more than half an hour, but during the test, the specialists found no malfunctions and extended the duration of the first flight to 96 minutes. The aircraft climbed to a height of 655 meters. The first flight of the device ended in a hard landing, causing damage to the design of the right wing console.

According to the US aviation rules for the civil unmanned aircraft weighing more than 25 kilograms, Facebook reported on the incident to the National Committee for Transport Security, which in November 2016 began investigating the incident. The investigation was completed in December last year, and Facebook received permission to continue testing with Aquila. Specialists came to the conclusion that the reason for the hard landing was a sharply increased aerodynamic resistance, which prevented the autopilot from maintaining a smooth glide path.

During the first flight, the Aquila operators expected that it would pass with winds, the speed of which would not exceed seven knots. Nevertheless, during landing, the drone got into a windy zone with a gust of wind up to 18 knots. This led to the fact that the lightweight device “threw” above the line of a smooth landing path calculated by the autopilot. As a result, the device reacted with a sharp decrease to return to the landing path, which led to a torsional load on the wing, and it got damaged.

The repeated trials were conducted at the Yuma training ground in Arizona just after dawn. After takeoff at a speed of 43 km/h, the unmanned aerial vehicle (UAV) picked up a height of 914 meters at a speed of 0.9 m/s. In flight, the operation of all on-board systems of the apparatus was checked. In general, the tests were completely successful.

The Aquila is developed with a wide application of composite materials according to the “flying wing” scheme. The wingspan of the device corresponds to the passenger aircraft Boeing 737 – 28 meters. In this case, the mass of the apparatus is several hundred times smaller than that of the liner. Approximately half of the mass of the UAV is in the batteries. It is assumed that Aquila will be able to stay in the air for up to 90 days and fly at an altitude from 18,000 to 27,000 meters.

In a full-fledged configuration with transmitting equipment, the power consumption of the UAV will be about five thousand watts. Batteries are designed to provide the device with energy for 14 hours. One drone with the help of a radio relay transmitter will be able to broadcast the Internet to a territory of 40-80 sq km with a speed of more than 30 gigabits per second. The signal will be received by radio relay stations, which will then be transmitted to end users.

In early 2017 it became clear that the American holding Alphabet refused to develop unmanned aerial vehicles with solar panels, with the help of which in the future it was planned to distribute the Internet in hard-to-reach areas of the Earth. The holding considered the use of drones to distribute the Internet impractical, deciding that for these purposes, the stratospets of the Loon project would be better suited. The development of the Internet drones was conducted from 2014 in the framework of the Titan project. The first prototype of the device was shown in 2015. In mid-2014, the first flight of the apparatus took place, which ended in an accident and damage to the wing of a drone. In 2016, the work virtually stopped, and in early 2017, Alphabet invited the engineers of Titan to move to other projects. The length of the Solara 50 drone was 15 meters, and the wingspan 50 meters. This device is designed to carry a payload weighing up to 32 kilograms. The entire top surface of the device is covered with solar panels, which in flight must feed an electric motor with a pulling propeller and on-board equipment, and also charge the batteries.

It was assumed that each drone Solara 50 will perform flights at an altitude of 20,000 meters, and the duration of non-stop flight should be about five years. To transfer the Internet, the developers of the Titan project planned to use a standard 5G network, one of which supports data exchange at speeds up to 10 gigabits per second.