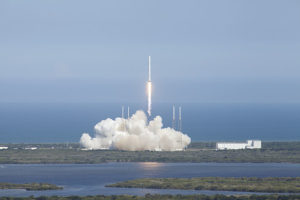 The carrier rocket Falcon 9 with 10 telecommunications satellites Iridium NEXT on board was launched on Friday from the launch pad at the US Air Force base Vandenberg in California. The launch was carried out at 07:31 local time. The launch is broadcast on the SpaceX website, which developed the rocket.

SpaceX originally planned to make the launch in October 2018, but for various reasons, it was repeatedly postponed. The last time it was expected that the start will take place on January 8, but then it was postponed again. This is the eighth launch of the program.

On board, the Falcon 9 carries 10 telecommunications satellites owned by Iridium Communications. This international mobile operator based in Virginia, in partnership with the Franco-Italian company Thales Alenia Space, has set the task of placing more than 80 Iridium communication satellites into orbit.

The launch of at least 75 such devices is assigned to SpaceX. Earlier it was planned that the entire grouping of Iridium NEXT will be placed in orbit by the end of last year, but this did not happen due to the transfer of several launches.