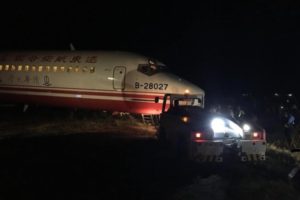 Far Eastern Air Transport plane McDonnell Douglas MD-83, performing flight FE321 with 121 passengers on board, suffered a runway excursion after landing on runway 23 at Kalibo International Airport in Aklan, Philippines. The aircraft was landing after a flight from Taipei-Taiwan Taoyuan International Airport but was not able to stop on time and overran it, ending into soft ground. The aircraft suffered slight damages into the nose landing gear.

According to an advisory from Office of Civil Defense, all 121 passengers and seven crew members of Far Eastern Air Transport flight FE321 are safe and no one was hurt.

The incident caused the shutdown of the airport’s operation for an hour-and-half, but flights resumed after the aircraft has been removed from the runway.

McDonnell Douglas MD-80 is a series of twin-engine, short- to medium-range, single-aisle commercial jetliners. It was lengthened and updated from the DC-9. This series can seat from 130 to 172 passengers depending on variant and seating configuration.