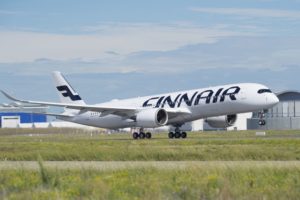 Finnair Airbus A350 suffered technical problem after takeoff from Helsinki’s Vantaa Airport en route to Hong Kong. The aircraft with 269 people on board, was climbing out, when crew received indication for technical problem and entered a hold maintaining a maximum speed of 285 kts. The plane changed the course and continue circling in Finish airspace, until landing safely on runway 04R about 105 minutes after departure. There were no reported injuries and no damages to the aircraft during the incident. All the passengers were rebooked onto other flights.

The airline reported that Finnair Airbus A350 returned to Helsinki due to a technical problem, but was pushed to circle for several hours due to the amount of fuel on board, which did not allowed the aircraft to land immediately.

Finnair Airbus A350 landed back on Helsinki’s Vantaa Airport with slightly higher than normal speed, due to higher amount of fuel, but crew succeeded to stop it accordingly.

The investigation for the root cause of the accident is under way. The aircraft remained on the ground for repairs.

Airbus A350 is a family of long-range, twin-engine wide-body jet airliners developed by European aircraft manufacturer Airbus. The A350 is the first Airbus aircraft with both fuselage and wing structures made primarily of carbon-fibre-reinforced polymer. Its variants seat 280 to 366 passengers in typical three-class seating layouts.