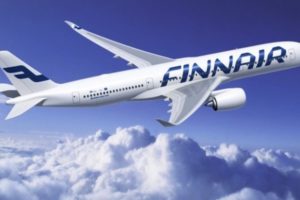 Finnair won the prestigious award of Skytrax World Airline Awards, for the eighth consecutive year, having received the title of the best airline in Northern Europe. The award ceremony took place at the 52nd Paris International Air Show in Le Bourget. The decision is made on the basis of an independent study – in the survey, which took place from August 2016 to May 2017, more than 19 million passengers from 105 countries took advantage of the services of 325 airlines.

“We are proud that Skytrax and passengers from all over the world have again named Finnair the best airline in Northern Europe”, said Finnair Senior Vice President, Piia Karhu. “Remaining faithful to the principles of Scandinavian hospitality, which has become Finnair’s business card, we strive to provide the highest level of service at all stages of the flight, constantly developing our services available on the ground and in the air,” added she.

Finnair has invested heavily in increasing the fleet of Airbus A350 aircraft to ensure that passengers receive the highest level of service at the airport and on board an airliner, from the time of registration until the end of the flight.

According to Piia Karhu, Finnair will further improve its customer service, using innovative digital solutions to improve the quality of service. Now passengers of all long-haul flights can use the portal Nordic Sky Wi-Fi, and the number of users of the mobile application is constantly increasing.

Developing digital services, Finnair became the first airline in the world to launch the Alipay service on board. At the airport in Helsinki in the test mode, the face recognition system began to work, which will help to speed up the registration for the flight and make it more comfortable for passengers.

Finnair is the flag carrier and largest airline of Finland, with its headquarters in Vantaa on the grounds of Helsinki Airport, its main hub. Finnair and its subsidiaries dominate both domestic and international air travel in Finland.