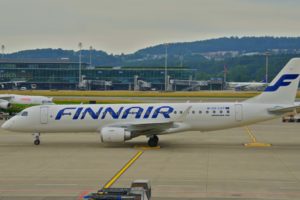 The aircraft Embraer ERJ-190 of Finnair landed by emergency in Turku airport after smoke odor on board. The airplane was en route from Helsinki to Swedish city of Gothenburg with 100 passengers on board, but during climbing passengers complained from smoke odor in the cabin. The aircraft diverted to Turku, where landed safely several minutes later. According to Finnair, the landing was successful and all the people on board were immediately evacuated. No reports about injuries or fire detected on board. All the people were rebooked for another flight to Gothenburg on Monday afternoon.

The aircraft of Finnair will pass a thorough technical check before return in service again. The rescue services have not yet reported where exactly the smoke odor was detected.

There was no fire on board, but local authorities initiated investigation for the root cause of the accident.